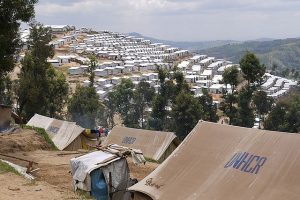 Many of these refugees ended up in camps, both in Europe and also in African countries. Sub Saharan Africa hosts more than 26% of the world’s refugees. In 2017, Africa hosted  5,531,693 refugees.  81% of the forcibly displaced people are internally displaced

The top ten countries of origin are: (total of internally displaced people and refugees in order of numbers).  Sudan, South Sudan, Somalia, Nigeria, DRC, Central African Republic, Ethiopia, Lybia, Eritrea and Burundi. As a percentage of the population, these numbers are frightening. In 2016,  over 408,000 Burundians were displaced, this is about 4% of the population. In Eritrea, that percentage is 9.8%.

To put it in perspective, in 2016, 2245 people sought asylum in Ireland, and there were 4,055 pending applications, that brings the total of asylum seekers to 6245 people in 2016. Compare this to Uganda, and you realise that Ireland can hardly speak of a crisis.

All these displaced people need the basics: a safe place to stay, clothes, food and access to care.

In International Community Dynamics we have been collecting clothes and distributing them to asylum seekers regularly.

Some of the asylum seekers we met here have had to leave their families behind, and of some of these family members, we know that they have ended up in refugee camps in Rwanda, Uganda or Tanzania.

We have now decided to start collecting clothes for refugees arriving here and also for refugees in Sub-Saharan countries.

If you would like to help out, please feel free to spread the word. We can be contacted on this site or on our Facebook page facebook.com/InternationalCommunityDynamics. We are looking for clothes but also for companies like industrial laundries or hotels who are willing to donate second-hand beddings for the clinics in refugee camps.

We will also organise fundraising events to finance the hire and transport of a container.
You can also donate by clicking on the ‘donate’ button in the side panel.

We will work together with scouts groups in the African countries to coordinate and organise the delivery of the clothing donations.

We have set up a Paypal account for those of you who’d like to help us by donating. Any amount, no matter how small, is welcome and gratefully accepted.

You can support us here.