I was delighted to get the email confirming my attendance at the 7th EU Migration Forum was accepted. And I was intrigued to see what it would be like to become a member of the bureau. I put myself down for elections, although I am a totally unknown person in the EU sphere. Worth giving it a go, I thought.

The EU Migration forum is organised by  European Commission and the European Economic and Social Committee since 2015.

The fora give a voice to the many civic societies across Europe, as well as public bodies and some individuals. It is a very intense two days of speeches and workshops. The findings of the forum will then be used to shape new policies.

There were 200 people attending the forum in the very opulent Jaques Delors Building on the Belliard Straat, a throw away from the Schuman Plein in Brussels.

The Forum was opened by

The importance of including and listening to civic society was mentioned, as well as the challenges the EU has faced over the last year.

I was proud to hear Mahdiyah Ayub from Ireland talk about the importance of sports in integration, and about Football for Unity, a wonderful example of how sports can help.

The next part was filled by women connectors in Europe.

I was especially impressed by Rache Streefland, talking about Utrecht and its efforts to help the migrant

community to find a place, such as sharing accommodation for students and young migrants, what a wonderful idea.

Language is always an issue, but by sharing accommodation, people will get to know each other learn about

the different cultural habits, but also the daily life in the host town.

Rather than hiding away IPAs away from town, the effort is made to make them an immediate part of town. This is so much better.

Catriona Graham, from the EU Scout Bureau, talked about the amazing efforts made by the scouts in Poland to help the millions of Ukrainian refugees to find a place, get supplies and re-settle into a (temporary) life in Poland and other neighbouring countries.

The lady from Spain especially, made us understand the huge differences there are between the different EU countries, in the scale of the refugee issues there.

Q&A was then opened and I asked Ms Graham, after congratulating the scouts on their amazing efforts, if there are also plans to support the other refugees and if the Scouts Group will make an effort to make other refugees feel welcome too. I gave her the example of Ireland where you never see any POC in the scouts and where, as our co-founder experienced, there still is discrimination happening. (Our Co-founder, a Commissioner of the Scouts Group in Burundi, who joined the scouts in Cork, only to leave, feeling very disappointed, discriminated against and not valued for the amazing experience he had leading Scouts in his country.)

Ms Graham said that efforts were made to establish more inclusion in Ireland and to work on the issues there.

She came to see me in private afterwards and told me she was aware of the issues and that a lot more efforts need to be made, she was happy for me to have raised this issue.

We had a wonderful Syrian Lunch.

The afternoon started with workshops. I was in workshop 4, Advancing participation and engagement of young migrants.

I was part of a discussion group of Spanish youth workers, a great way to get an insight into what goes on in other countries and to practice my Spanish knowledge.

On question number 1, we all agreed that the policy-building efforts should be led by experts in the field. These experts being the young migrants themselves. (‘if you have an engineering problem, you will ask an expert to help solve it, this expert will be an engineer’).

We decided there should be a quota in working groups, which should reflect the society. If 1/10 people in a certain area is a migrant, LGBTQI, Roma, etc, then that should be reflected in the working groups.

The next question was about which challenges civic societies face in their efforts to integrate young migrants.

The youth workers all had a mentorship role. Young people arrive in a new country. Often after a long and perilous voyage. The shock of coming from one culture into w country where everything is different is often underestimated. So the best support to offer is mentorship, giving the young people the time to adjust, helping them step-by-step to get accustomed to the new country, new language, and new culture.

We also felt that the way this is being discussed is about the ‘them and us’, although, if we talk about integration, we need to address both sides. Is society ready to help. What do we do about bias, etc

Many youth workers asked this question: How can you ask people to integrate when you also make them feel unwanted? And that is something that came up during the whole forum.

The views were that every migrant should be given acess to education and also third level education, Thanks to the efforts of UEE, Union Des Etudiants Exilés, many refugees and exiled students in France now have the right to continue/start their studies without extra costs. This should become a EU rule.

Among the specific challenges were named the conditions of living for many young people (refugee camps, homelessness, etc) , also the pushbacks of refugees within the EU (eg France and Spain) seems to be a huge issue at the moment, with many people dying in their efforts to reach another country.

The Bureau Elections were then held, every candidate had 2 minutes to speak.

Here is what I said: 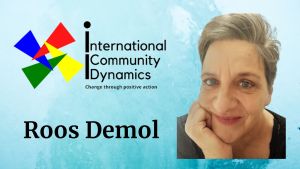 As a Belgian woman who has enjoyed freedom of movement in the EU, I am a proud
European. I believe in the EU and I also believe we can improve it, making it more
accessible, less of a fortress and more of a Citadel to those who need protection from
persecution, wars, violence and climate change.
ICD is a grassroots organisation, our directors and volunteers are 95% migrants and refugees.
We are members of the Refugee Council’s asylum network, The Anna Lindh Foundation and
the Africa Solidarity Centre. We have joined the Irish network Against Racism, Arts for all,
and the local PPN. (Public Participation Network) We collaborate with refugee supporting
agencies and educational institutions across the country, as well as NALA, the adult Literacy
agency and Unesco Employability program.
Our own Citadel, a world music band of International Protection Applicants continues to
create awareness and has been asked to play at major Festivals across the country, while our
cricket team has produced a national player, who may one day lead Ireland to victory on
world stage.
On a personal level I have become a director on the Africa Solidarity Centre’s Board of
Management, and have been active in the steering committee of the Cork City of Sanctuary

Movement, I have contributed to the EASPD think tank on how to help disabled Ukrainian
refugees in Europe.
I have co-operated with IHREC (Irish Human Rights and Equality Commission) to create a
guide for employers for hiring International Protection Applicants, I have assisted in
webinars for IBEC (Irish Business and Employers Confederation) Networks, and created a
major impact in the country through advocacy and pro-action.
I would now love to take this passion of mine a step further. I would like to join the Bureau
as a member of a national civic society, being at the centre of it all will help us to make
connections, to collaborate and learn from best practices, to help the EU become a place that
is really supporting refugees from any country, from any background.
Let’s make Europe become a place where everyone belongs.

We enjoyed a nice Syrian meal, and a performance by a band of refugees, Miksi. 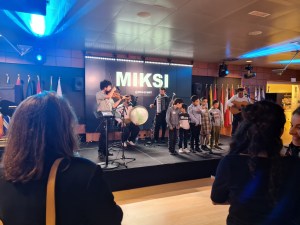 Day two started with the election results. The Bureau membership will go to the Syrian refugee and member of the French UEE. I was delighted for him and not at all disappointed, although I did get some votes, thanks to my interventions. But I can feel the heaviness of bureaucracy, and I am not convinced that I would have much of an influence on what is going on. Happy to be where I am.

The Q&A session was lively but unfortunately too short.

The open Floor sessions were discussion groups on topics proposed and voted for by the audience. I chose to go the pushback one, where I was sadly disappointed to hear of the pushback situations where people have lost their lives.

We did not hear of the outcome of other discussion groups, these may be published at a later day.

The day ended with a discussion panel

This was the end of the forum, I was happy to have gone, more for networking reasons, and also to listen. But the question on anyone’s lips was, what will come from this now?

The EU is a big machine, and we are little NGOs . but not taking part seems wrong.

I do think it is important that as European organisations we come together, work together and learn from each other, not only in the EU Forum, but outside as well. I have met some wonderful people, and hope to build on that in the very near future.

I think we need to work on third-level education access to all in the first place, and then keep working on understanding, and awareness. Safe passage is a must. How can we bear, as proud Europeans, to see people drowning in the Mediterranean while trying to reach a better life? And how can we bear people dying because one country does not want them to cross the border?

How can we say that poverty is not a reason to move, and what about the upcoming refugees of climate change? This was not yet addressed in the Forum, and it is a huge issue, that has started already.

Here are the outcomes of previous fora. let’s hope something good comes out of this one.

Thank you EESC for organising and thank you to all who carry the plight and tribulations of refugees and IPAS at heart.